This is a new art fair experience for me: At the show I was in last weekend, I realized at some point on Saturday that I hadn't seen any sign of the familiar art show judges. They're the 2 or 3 clipboard-carrying folks who visit each booth, somewhat stealthily, trying to avoid too much contact with the artists, who may actually try to engage them in conversation regarding their art in order to possibly convince the judge to deem them worthy of an award. Of course, the judges are reluctant to spend time with each artist, because doing so would take too much time, so they give the display a glance and then place a circular colored sticker on the artists signage, make a check mark on the list, and move on.

Having seen none of this activity, I assumed that the show organizers had decided that awards would not be given this time. I was wrong. A man poked his head in my booth late Saturday, and said, "You should have won the 2-D award." I thanked him for the compliment and added that I wasn't aware that there were awards or judges since none visited me, even in a barely visible state. I pointed to my booth sign without stickers and said they must have skipped me. He came back several minutes later and said he found out that the there were in fact no judges present at the show, as I suspected, but that the awards were decided based on the images that we submitted for our online applications! Virtual judges! Now that's efficient, don't you think?
Posted by Anne Gilna at 9:58 PM No comments:

Exactly a year ago I wrote in this blog about an incident at an art show in which a vendor was discovered to be selling mass-produced items and as a result was forced to display signs stating that fact. This year, at the same show, the issue repeated itself, times three. The bogus vendors, whom I never saw in their booths, were given the choice to either leave the show or display the signs of shame. One of them chose leaving, and I saw him wheeling out his cartons of whatever he was trying to sell. I'm not sure about the fate of the others. I don't need to repeat my opinion of such opportunists, but I will say that there were more than those three at this show.
Posted by Anne Gilna at 9:31 PM No comments:

The Best Indoor Display Ever

The recent indoor show I attended had a smaller than average space and it's always a challenge to display the artwork in this setting. I believe that this time we (I admit I had help) found the best possible way to fit everything in the best way possible. It was also good to come home with a little bit less art than I came in with. 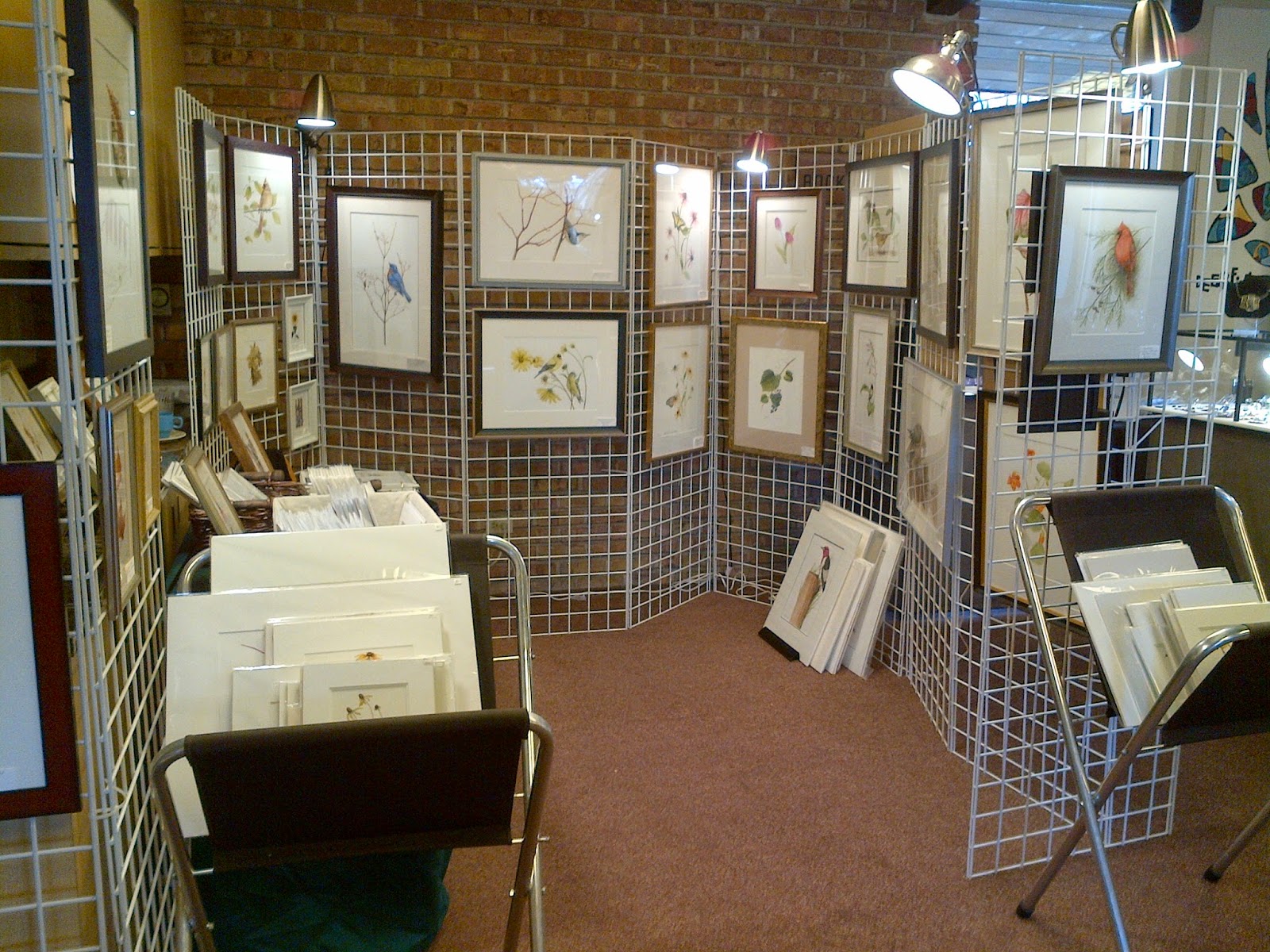 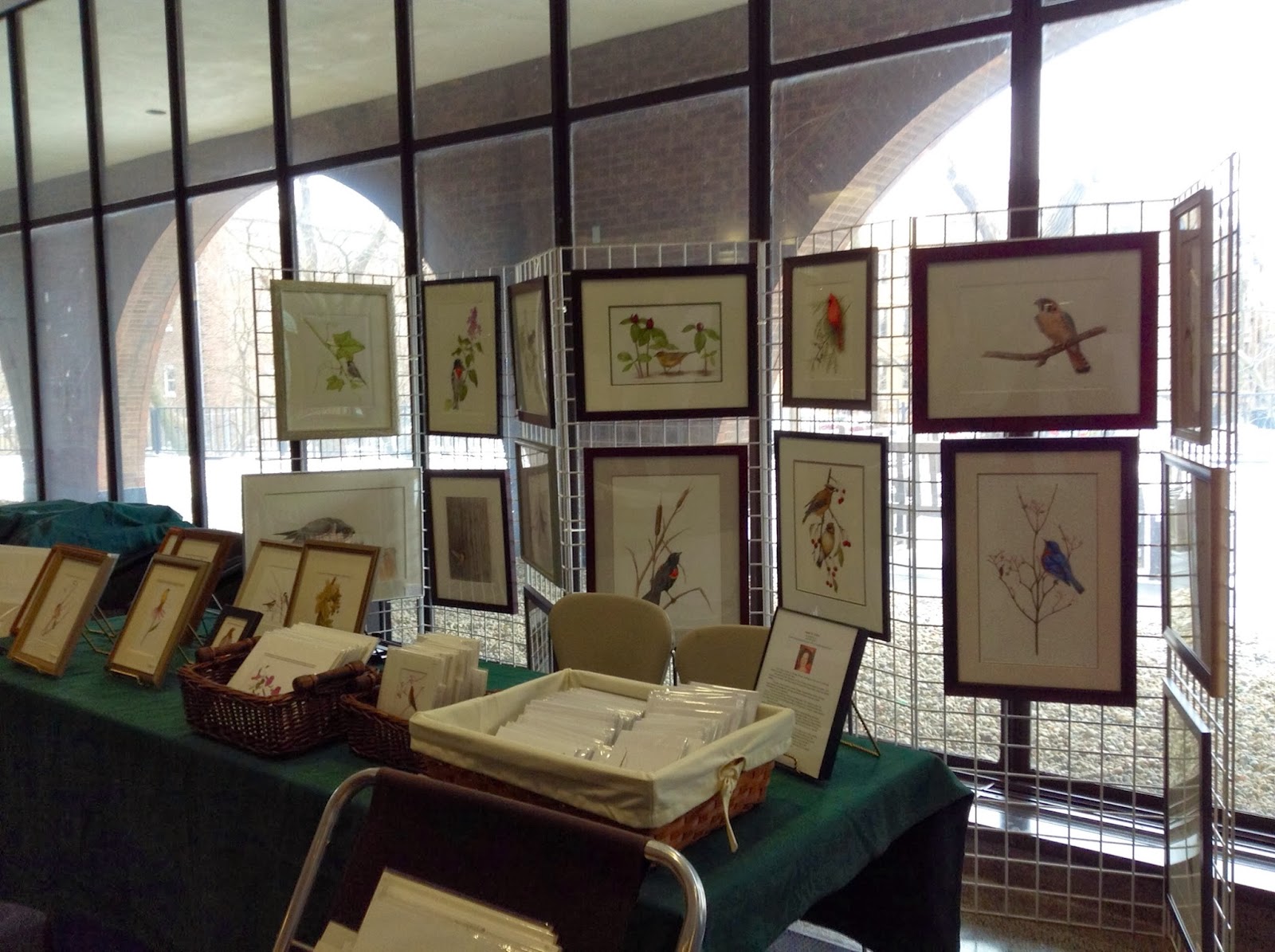 This was my display at the Birding America X Conference in Chicago on Saturday.
It was good to be around such dedicated bird people.
Posted by Anne Gilna at 3:16 PM No comments:

So it has been 6 weeks or so since the last post and I've yet to see that warm day. But, I did complete another watercolor painting. It's a cardinal, by the way. 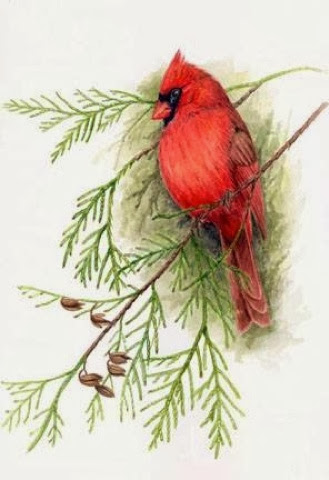 This painting was completed a few months ago, but until now I hadn't realized that it wasn't posted on the blog. The sumac berries are very appealing to birds, and the leaves and berries are appealing to paint.

Posted by Anne Gilna at 9:38 PM No comments:

This is a tough winter. The combination of cold, wind and snow accumulation has not inspired me to be creative or productive. The temperature is dropping and the north wind is making the windows rattle. There is a bit of extra daylight at the beginning and the end of the day, and I know it's increasing, but it's useless against the onslaught. Oh, for a warm day!

Posted by Anne Gilna at 9:31 PM No comments: