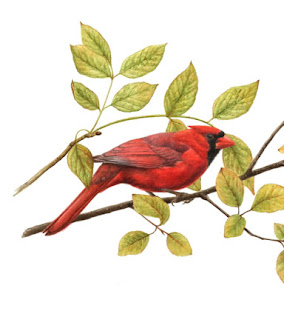 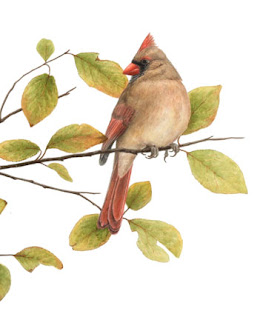 After giving the issue a lot of thought, I have decided that it's best if the cardinal couple split up. For the sake of the art. I painted them together 3 years ago, with the intention of showing them interacting as a faithful couple, as cardinals are often known. However, the painting was still with me unsold, and I had to figure out why.
First, its frame was rather dark and bulky, and may have detracted from the painting. Its layout was also decidedly horizontal, perhaps too much. There may have been a bit too much space between them, which made the design a slight bit off balance.
Honestly, I was tired of shlepping this painting to and from shows. Cardinals usually are quick sellers, and even with "this economy" I expected them to have sold by now. With their legal separation, they can be displayed as good friends instead of mates. I added some more leaves to the male's picture to fill in some gaps. I'll mat and frame them identically, and with these improvements I'm hoping they'll find that it's for the best.
Posted by Anne Gilna at 8:49 PM No comments:

It's hard to believe the art fair season is over, for me, that is. Art in the Barn was hard work, but fun. The inside of a barn can be cold! Tomorrow, I'm calling to cancel my account with the merchant services company I've been using for the last 7 years. I'm fed up with their fees for membership, inactivity fees, activity fees, malfunctions when I phone in the transactions, and the percentage taken from each transaction.

Yes, it's time. I'm going to take the step towards "The Square". This requires that I get a smart phone, which I've been avoiding up until now, but I've heard such good reports about the Square, that it's inevitable that I sign up. More about that later. . .
Posted by Anne Gilna at 10:40 PM No comments: 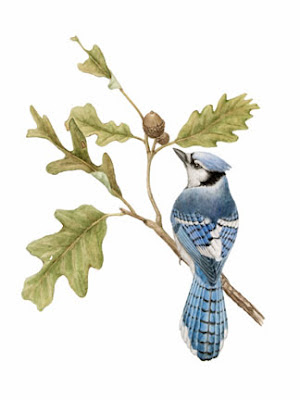 To commemorate the recent sale of my latest blue jay painting, I whipped up another one. This will be a bountiful season for these birds. The acorns are raining from the trees this "Fall". I don't know what causes oak trees to have an overabundance of acorns one year and not another, but this is one of those abundant years. In honor of this season of acorn bombardment, I painted a blue jay contemplating one of them.

Posted by Anne Gilna at 8:48 PM No comments:

Fortunately, the rain never came to Lake Forest, just major humidity. Sales were good, and I have a lot of work to do before the next show.  I said goodbye to several pieces, including my favorite painting, the Bluebird & Sumac. I have been researching the next creation, and will start immediately on producing a new supply of prints and cards. It's a good problem to have.
Posted by Anne Gilna at 9:37 PM No comments:

Today the remnants of hurricane/tropical storm Isaac visited this area, and is expected to stick around for a few days. This unusual event would be an interesting phenomenon, except tomorrow I'll be setting up for the Art Fair on the Square, and setting up in the rain is not fun. It's so humid out that my paintings may get frizzy.
Posted by Anne Gilna at 9:30 PM No comments: