I try to cover all 4 seasons my paintings - Hmmm . . . can you guess which season this one is? Spring hasn't come easy this year but this painting is my way of celebrating its arrival. 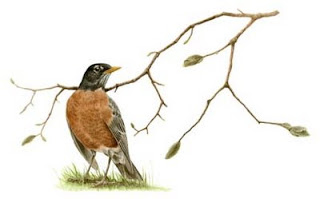 "Sign of Spring", Robin and Magnolia, Original Watercolor by Anne Gilna
Posted by Anne Gilna at 9:32 PM No comments:

The Art and Plant Sale

It was good to get together with the Reed-Turner Botanical Artists, though art sales were slow. It just was. The artists are very talented, and we're keeping keeping on.
Posted by Anne Gilna at 6:17 PM No comments:

The NSUC show went really well. Every year I make an appearance to set up for this show, greeting the same volunteers, occupying the same booth space, and even seeing many of the same customers. Most of the same artists are there. It's very reassuring, yet strange that an entire year passes in between a show, and little changes from one to the next. Attendance was noticeably higher, in part due to bad weather (the opposite of an outdoor show) and free admission.

Back to the printer issue. It turns out that a new print head, again, was needed. We're giving it another try. It's working great presently, though by deleting and reinstalling the printer driver, the color adjustments I'd made were lost, and images looked too intensely colored, and generally off. I'm making the corrections, recalling the general tendency of the program to overdo it regarding saturation.
Posted by Anne Gilna at 10:56 PM No comments: